How to install Skype on iOS7 or iOS6

11 september 2016 at 18:42 3 comments Guidelines
(1 vote)
After releasing the version 6.14.143, it has been announced that from that day the new versions of Skype for iOS will only work on iOS 8 and older. For owners of devices with iOS 7 or younger, the old version 6.13.158 will remain available in the AppStore which will be offered instead of the latest version. Of course, it’s very sad news (especially for owners of older devices), but let’s focus on the problem because of which these users generally cannot install even older versions of Skype.


As I understand it, the biggest problem is associated with the AppStore restrictions. The fact is that before the first installation of any application, instead of offering the old version, the store checks if all the system requirements of the latest version are satisfied. That's why when you try to install Skype on iOS 7.1.2, the following warning appears: To resolve this problem, we have to “prove” the AppStore that we have right to download older versions of Skype. Therefore, the first thing to do is to download the latest version of Skype using our Apple ID (which is used on a device with iOS 7 or iOS 6). For this end, we have two options:
Now you only need to open the AppStore on the old device, login with our Apple ID that was used in the previous step, find Skype and click on the “Download” button. Instead of the normal boot process, the following message will appear: 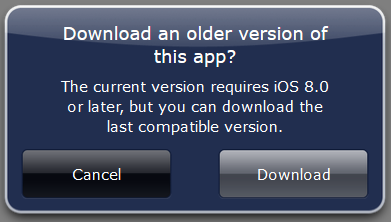 Download an older version of this app?
The current version requires iOS 8.0 or later, but you can download the last compatible version.

Seeing this notice, feel free to click “Download”, and the version 6.13.158 will be installed on your device. As you understand, this version will no longer be updated, that is, no new features will be added, and no bugs will be corrected. Nevertheless, it will support all features, available before the release of the version 6.14.143 (including chats, audio calls and video calls).

If the message about the need to install iOS 8 still appears, and you still cannot download Skype on your device, you need to log out from the Apple ID, reboot the device, open the AppStore and try to install Skype again.

How to log out from the Apple ID on iOS device?


How to log in with the Apple ID on iOS device?